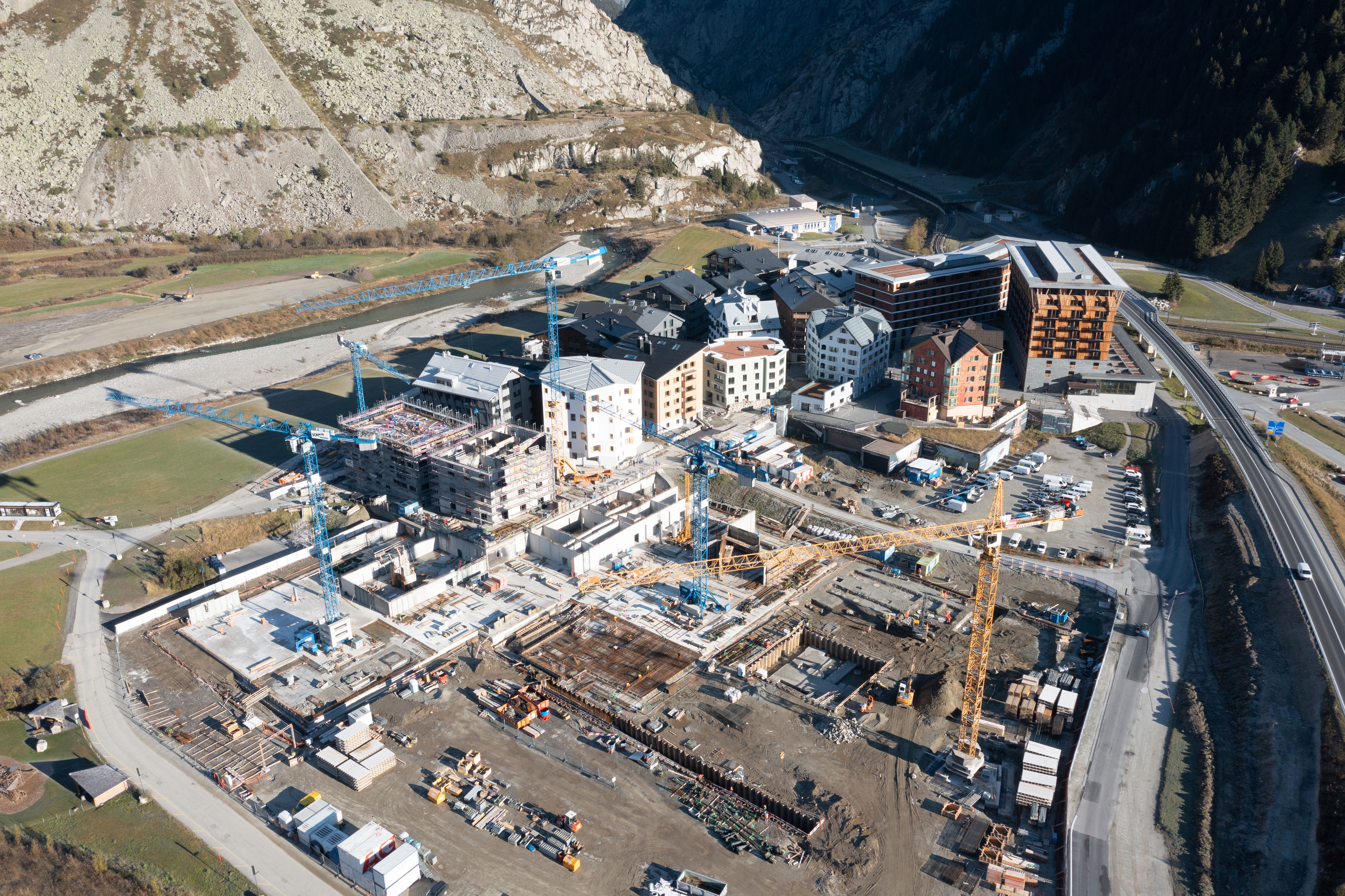 Environmental impact monitoring ensures that environmental requirements are being complied with during construction work in Andermatt Reuss. Because the next large expansion phase was started last year, there were a greater number of inspections by the local environmental impact monitors. The result remained the same: The environmental requirements for construction work were correctly implemented. In addition, it was once again demonstrated how important the Andermatt Swiss Alps Golf Course is for the flora and fauna in the Urseren Valley.

Since the start of construction work in 2009, Dr Beat Hodel of the company Hodel Umweltberatung has been acting as environmental impact monitor for Andermatt Reuss on behalf of Andermatt Swiss Alps AG. The monitoring is being conducted in accordance with specifications approved by the Office for Environmental Protection of the Canton of Uri. Reporting takes place annually and covers the environmental impact and measures associated with construction activities, as well as the ecological benefits in connection with operation of the golf course and information about the pending revitalisation of the Dürstelenbach river. Last year saw the start of the second large development phase of Andermatt Reuss with an expansion of the podium and the construction of further multi-family buildings. Because of the large construction work, local environmental impact monitors stepped up their inspections. From mid-May to mid-December of last year, an on-site check took place once a week, meaning a total of 28 inspections.

The technical condition of the machinery and vehicles being used was checked in order to prevent excessive emissions. Diesel-powered equipment with engine output of more than 18 kilowatts is required to be outfitted with inspected particle filter systems. Dust monitoring recommenced in 2021. With one exception in the second half of August, which was extra-ordinarily dry, the emissions threshold in the Ordinance on Air Pollution Control was comfortably complied with, despite intensive construction work. The threshold overrun was promptly reported so that dust inhibition measures could be launched. Nitrogen dioxide emissions were once again continuously measured and documented. However, these are unrelated to the construction work in Andermatt.

The issues with relevance to water pollution control in 2021 were primarily the expansion of the podium and the associated lowering of the groundwater table. In addition, a construction site drainage plan was prepared. The clean water pumped from the groundwater beneath the podium expansion was fed into the Unteralpreuss river via a settling pond. Water from local water reserves and surface water from the excavations in the podium area was collected, neutralised and trickled off on site. Generated wash water was taken away in suction tankers. Groundwater monitoring was intensified, and this shows: The lowering of the groundwater table can be seen in both the quantitative and the qualitative (change in the conductivity) groundwater monitoring. However, no negative impact on the groundwater was identified.

In addition, the pH level of the Unteralpreuss river was tested in 2021 before and after the pumped groundwater was added. The lowering of the groundwater table was clearly visible at the downstream measuring point, because the groundwater had a pH that was roughly a half unit lower than the water in the Unteralpreuss. Only one incident occurred during the entire monitoring period. On August 4, water containing concrete was briefly introduced into the Unteralpreuss. The incident was documented and discussed with the responsible company. Gratifyingly, no further alkaline entries had been registered in the Unteralpreuss by the time construction was completed on December 16. The Reuss and Dürstelenbach rivers were not monitored, since no construction waste water had been introduced into them in 2019 and 2020.

Measures to protect flora and fauna were primarily implemented on the Andermatt Swiss Alps Golf Course. These are coordinated by the Expert Commission for Ecology. Going forward, the GEO-certified course is looking to participate in the Audubon Cooperative Sanctuary Program for Golf as a further environmental certification.

For its next environmental measure, Andermatt Swiss Alps will revitalise the Dürstelenbach, a highly valuable freshwater river. Pursuant to an infrastructure contract with the Canton of Uri, the company is responsible for this. The revitalisation of the river is planned to be implemented in 2022 or 2023. Since third-party land is also needed for this purpose, the canton is engaged in corresponding negotiations.

Butterflies are significant indicators of biodiversity and thus of the ecological value of nature conservation areas. Therefore, the Andermatt golf course was monitored in 2021 in the areas most meaningful for this species group. A total of 56 butterfly species were able to be identified – a remarkably high number. This includes ten species contained on the current Red Lists as potentially endangered or endangered. A comparison with previous recordings of the area occupied today by the golf course grounds shows that none of the species are missing that are important in nature conservation terms. In addition, it is evident that the current conditions make populations possible that are vital for the species typical of this landscape. Pursuant to the report, this positive finding is based on the protection and practised management of nature conservation areas on the Andermatt Swiss Alps Golf Course.

Since extensive excavation work was performed again in 2021 for the first time after a number of years, the soil protection concept from 2008 had to be updated. Some 7,000 m2 top soil was removed for the podium expansion and 5,700 m2 for the Bäz car park. Most of the removed soil is being stored and managed in depots and will be put back after the construction work is finished. For instance, in the fall of 2021, about 290 m3 of top soil was added around the completed multifamily buildings Alma, Turmfalke T1 and T2, Arve, Frame and Enzian. Landscaping began this spring.