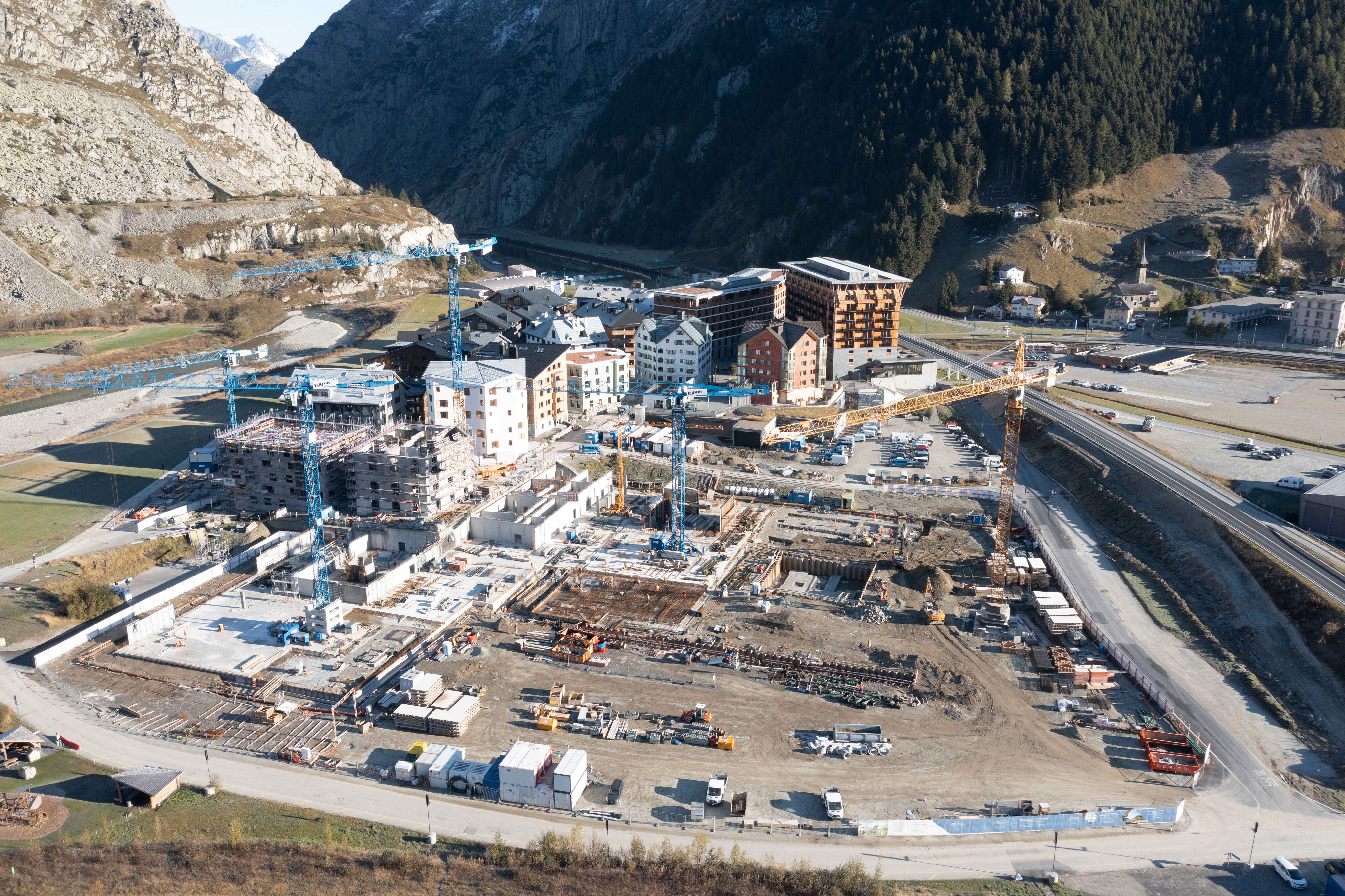 Andermatt Swiss Alps has sold over 400 residential units since the start of the project. So far in 2021, sales have increased year on year by a third. The achieved volume corresponds to roughly half of the total holiday apartment stock in Andermatt. The persistently high demand is reflected in the currently largest construction volume since building began in 2007.

“Andermatt Swiss Alps is the success story in the Swiss Alps. The pace of development is now being accelerated further,” says Andermatt Swiss Alps CEO Raphael Krucker. “Of the 420 holiday apartments completed in the village quarter of Andermatt Reuss, including the Radisson Blu Reussen and at The Chedi Andermatt, 408 have been sold.”

Krucker adds: “In this year alone, demand has increased sharply, and we have been able to sell over 100 units, representing a rise of more than one third compared with last year, which itself was strong.” The face of Andermatt Reuss has evolved further in recent months: In the coming months, 130 new apartments around Piazza Gottardo will be handed over to their owners.

In order to be able to satisfy the persistently high demand, the infrastructure plinth is being expanded to roughly 20,000 m2. Krucker notes: “This construction project, one of the largest in the Alps, enables us to expand the village quarter of Andermatt Reuss by an additional 16 apartment buildings and two shopping streets with retail and dining options. Planning has reached the stage that market demand can be met accordingly. The construction of further apartment buildings is scheduled to start in the spring of 2022.

Two of these new buildings will be launched on the market in December 2021. Elva consists of 11 elegant residential units with up to four bedrooms. The southwest-facing building features a sauna and a fitness studio. Mira has 18 mezzanine apartments with either one or two bedrooms. The stylish building is located in the heart of the lively centre of Andermatt Reuss.

“We expect that demand will increase further at the start of the winter season, since the waiting lists for Elva and Mira are already filling up,” says Russell Collins, Head of Sales. He points to the upswing in demand in the luxury segment, where four of the five remaining The Chedi penthouses were able to be sold.

Expansion of the infrastructure

The apartment buildings are set on an infrastructure plinth (also called a podium). In order to enable new buildings to be constructed, this plinth is being expanded. It contains 325 new parking spaces, one third with electric charging stations. Sustainability is also important in construction. For instance, all buildings are being constructed to the Minergie standard, and a great amount of wood is being used for them. And the energy – electricity and heat – is 100% CO2-neutral. Andermatt Swiss Alps also has the Swisstainable label.

The expansion work in Andermatt Reuss constitutes a great logistical challenge with respect to transport through the Schöllenen Gorge to Andermatt, but also in terms of procurement. For instance, about 35,000 m3, or 84,000 tonnes, of cement is being used for the expansion of the infrastructure plinth alone. The infrastructure plinth is being built on 700 pilings drilled 30 metres deep into the subsurface. Because the groundwater table needs to be lowered for this purpose, 1,000 m3 of water is being pumped out per hour and diverted to the rivers through settling ponds.

Of the 420 residential units that have been built, 12 of them are still available (as of mid-November 2021). Sixty-nine percent of buyers have their residence in Switzerland. Of the buyers who reside outside of Switzerland, half come from Europe and half from elsewhere in the world. Fifty percent of buyers have placed their apartment in the rental programme of Andermatt Swiss Alps. Apartments that are rented out have an occupancy rate of about 50%. In the final stage of the expansion, the project will include a total of about 2,000 residential units with up to 10,000 beds.